to buy or not to buy? 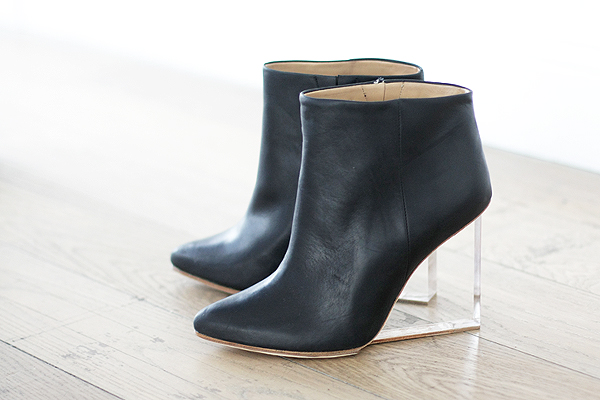 Here’s something I never thought I’d write: On Tuesday evening I went out shopping, when suddenly I stood next to Sarah Jessica Parker as she held up a pair of shoes and squealed with delight: “They’re amaaaaaazing!”

Let me repeat that, because I still can’t quite believe this happened: Me, Sarah Jessica Parker, shoes.

For a moment I thought it was 1998 and I had just started watching the first season of “Sex and the City” (and that “Sex and the City – The Movies” had never happened). But a moment later Miss Parker was gone, trailed by her assistants, and it was still 2012. Although I was actually in New York. I went there for the launch of the H&M x Maison Martin Margiela design collection, which is something else I can’t quite believe happened. I have no idea what kind of parties New Yorkers are used to, but I’m thinking this was something special even by their standards: H&M set up in an abandoned hotel for the night, invited a thousand people to watch some pretty incredible perfomances centered around the clothes and then shop the collection in a pop-up store. Bonus: it ended in a rain of silver confetti coming down a nine-storey atrium. And: Holy mother, is that Kanye West standing over there?

I’d had the chance to view the collection previously that day and had set my heart on this pair of booties with a perspex heel. The quality of the leather and the finishing are fantastic, especially for H&M. Also: don’t they look amaaaaaazing? I knew that I would probably humiliate myself in a mad scramble to get my hands on them. Turned out I didn’t have to humiliate myself, they stood right there in the middle of the pop-up store on a stack of shoe boxes, in my size, like they were meant to be mine. I was almost at the till when I noticed the price: 350 Dollars.

And then I put them back where I found them.

Now, if they had been a designer piece that I coveted, I might have just handed over my credit card. But, as it is, they are “just” a piece from a design collaboration. Am I being a snob? The quality of the boots is incredible. And they fit perfectly. Was I silly not to get them? Apparently some of the stock sold that night is already being flogged on ebay (surely not by you, Miss Parker? MISS PARKER?!), which is a bit of a joke since the collection doesn’t get to H&M stores until November 15. Maybe by then I will have decided that I want the boots after all and queue up for them.

So, would you have bought them? For 350 Dollars?

This entry was posted in fashion, hers and tagged ankle boots, H&M, Maison Martin Margiela. Bookmark the permalink. Post a comment or leave a trackback Trackback URL.