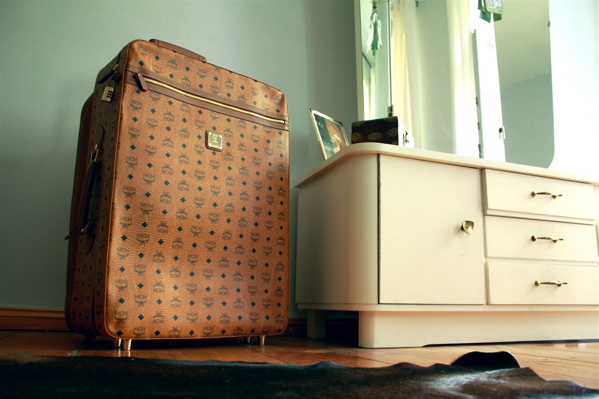 *I wasn’t quite sure what to think when I was given this bag by MCM to transport copies of Derzeit for the Metroplis project. It wasn’t exactly my style. But people don’t often stop me in the street to ask where I get luggage from and the suitcase was definitely easier to spot on the airport carousel than my usual black one (indeed I didn’t need to spot it – it was on more than one occasion the one people were pointing at as it moved by!). I actually got quite attached to it and was almost sad to give it back this week.

*As Prince William suddenly appears to be cool there have been a lot of articles about his style recently. I really liked this piece about royal style on Mr. Porter.

*It is so much classier to be sketched by Claridge’s new artist in residence than snapped by the paparazzi. You would also imagine he is far less likely to be working at three in the morning, therefore unlikely to capture you drunkenly clambering into a taxi outside.

*I think we can be pretty sure that Anna Wintour isn’t so obsessed that she spends her free time writing fashion related articles for Wikipedia. You have to question the credentials of the people who do. Thankfully we now have the experts at Voguepedia for a look inside the fashion world.

*After visiting ten stores stores and almost losing my nerve, I thought: I’ll never find a good, slim cut pair of khakis. But then I did: at Filippa K. Surprise runner-up: the khakis at Ben Sherman.

Hope you’re having a great weekend!

This entry was posted in a week in fashion, fashion and tagged . Bookmark the permalink. Post a comment or leave a trackback Trackback URL.