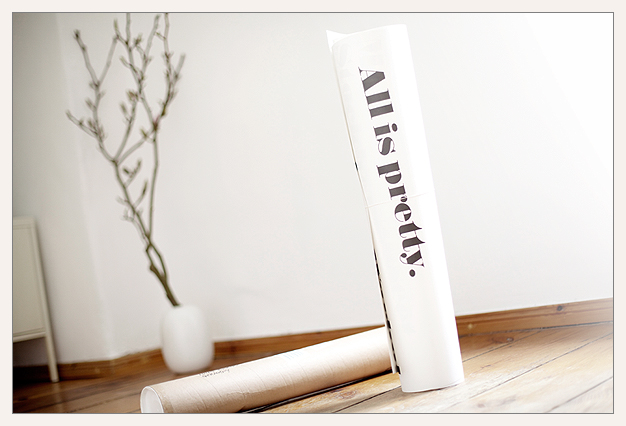 *I’m remodeling a room in the apartment into my new office space. Am I correct in thinking that any reasonable person would not start with such minor details as, say, a table on which to actually work, but with decorating the room first? Yes, that’s what I thought. This print arrived from Sweden last week. “All is pretty” seemed like a good mantra for an office and I think I’ll put it up on the wall facing the table, so that I can look at it while I work. You know, once I actually get a table.

*I’ve been browsing a lot of design blogs during the remodel and one that I kept coming back to is The Brickhouse Tumblr, because I’d move into every single one of the beautiful spaces collected there.

*I didn’t make it through the entire Oscars telecast this year. Steffi and I, whose couch I was parked on for the night, were having a hard enough time staying awake for the snoozefest that was the red carpet, debating whether stylists are now paid to make stars look exceptionally boring. For me, there were two exceptions who got their money’s worth: Charlize Theron and Jessica Chastain. Holy smokes! And since I like a good look behind the scenes, I enjoyed following how Charlize found her dress on The Coveteur and Jessica on Harper’s Bazaar (how adorable is that picture of her with her grandmother?).

*And speaking of behind the scenes: a good alternative to being in Paris for the shows is following the photos of the moment series on the T Magazine blog. Superb images, especially the backstage series from Chloé.

*Firstly, can I please win the lottery? Secondly, can I have every single coat from the Céline show? Thanks.

*And speaking of Céline and coats: this picture of Daria Werbowy in a cream coat is my inspiration for dressing this spring, as is the rest of the campaign. In my imaginary world, my hair looks exactly like that (but, no, I still don’t get the weird sandals with fur lining either).

*Ever since I saw this picture of Elin Kling on Sandra’s blog, I want to wear neckerchiefs this spring, too.

*I’ve told you how much I adore I love you before. And how could the man behind that brilliant song make anything but a wonderful Tumblr? Woodkid, I might love you, too.

*And finally… folks, you might not see me for a couple of months – because I will permanently move to Pinterest. Yes, I discovered it about two years after everyone else. Why did I not join before? Probably because I was afraid I’d become instantly addicted. And I have. You can find me here.

Have a good week!

This entry was posted in a week in fashion, fashion and tagged . Bookmark the permalink. Post a comment or leave a trackback Trackback URL.