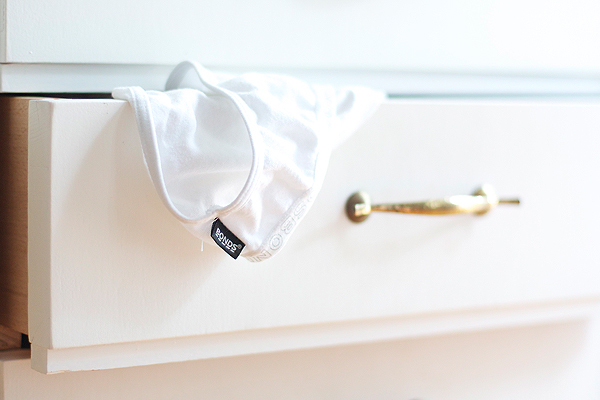 Like every Monday, my friend Okka has a question for me. Here it is:

Okka: A couple of weeks ago, Kati commented: Where can I find perfect, plain and affordable underwear – or am I the only one who occasionally looks at beautiful, but sinfully expensive underwear, but has been wearing the same old stuff for years? No, Kati, you’re not the only. So I’ll pass the question to Marlene!

Oh, if only you guys could see my underwear drawer! Thankfully you can’t. I’ve been meaning to clean it out for a while. So why haven’t I? Probably because I’m the only one who sees my underwear. Well, you know, almost the only one. And yet I feel instantly better when I’m wearing something as pretty underneath as I am on top. In the darkblue set from Cos it’s almost guaranteed to be a good day. However, if I put on the faded pair of knickers from H&M with a hole in the side seam, I might as well spend the rest of the day in a pair of jogging bottoms (yes, with a hole in the seam. You have a pair like that, right? RIGHT?). It really is time to throw those out. And replace them with some plain and perfect underwear from A.O.cms, who don’t just know how to make t-shirts but briefs too (briefs being the best cut, I think). Cos doesn’t offer a huge selection, but a good one and I go there especially for their seamless panties, which feel like wearing next to nothing and therefor just great. They’re my alternative for the best underwear I’ve found so far: Bonds from Australia. I’m waiting for the news that they’ll start shipping to Germany every day. And if ever the money fairy pays me an overnight visit, I’m going on a shopping spree at VPL and Stella McCartney. I just saw that Kati wrote with a great tip herself: underwear from Muji. Thanks, Kati!

This entry was posted in fashion, hers and tagged style column. Bookmark the permalink. Post a comment or leave a trackback Trackback URL.