a month in fashion (and other stuff) #4 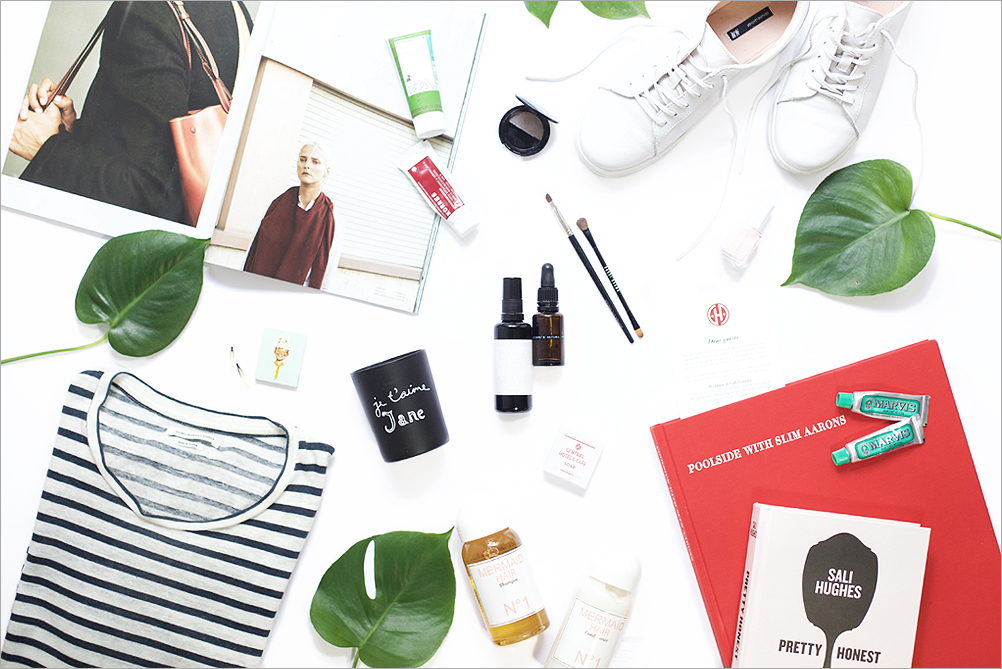 Last month, I pretended to be Beyoncé and booked an entire hotel in Copenhagen for myself. OK, so the hotel only has one room. Still. I felt like a star for one night. In no small part because the folks who run the Central Hotel have thought of everything: the room is beautifully designed yet cozy, it comes with an iPhone for the duration of the stay as well as fine extras, like Marvis toothpaste and postcards plus stamps, and cool cycles to keep pace with the bike-obsessed Copenhageners. I woke up from the soft light falling through the skylight above the bed and thought: this is TOO much. Then I discovered that breakfast would be served at Café Granola one street over, one of my favourite places in Copenhagen. A perfect stay.

In my hand luggage on the way there: travel sized Wild Rose Creme and Guava Body Butter from Korres which I’d been given as a present a while ago. I should have tried them sooner. The body butter especially is so rich and smells so lovely that it ought to be edible.

In my hand luggage on the way back: Cover, a magazine I love for fashion spreads like the one of Carmen Kass in Céline. The whole story is up on Sascha Oda’s website, an amazing photographer.

Something else that came home with me: the breton stripe ‘Karon’ shirt from Étoile Isabel Marant (it’s dangerous travelling without child, but with a lot of time on your hands, VERY dangerous). It seems to be sold out almost everywhere, but I just found it online at Harvey Nichols.

I’m a late convert to white sneakers, but these leather ones from H&M make me so blissfully happy, I bought them twice.

The perfect shade for a no-time-for-a-manicure-manicure: Prima Ballerina from Essie.

If I ever win the lottery, I’m buying myself a Slim Aarons print. ‘Penthouse Pool’? ‘Beverly Hills Hotel’? Or should I go with ‘C.Z. Guest’? As a lottery winner I’ll obviously take all three. Until then I’ll keep flicking through Poolside, from a time when jet-setters didn’t have Instagram and Slim Aarons was their chronicler. A book for dreaming yourself far away.

Pretty Honest is just as you’d expect from omniscient Sali Hughes, the Guardian’s beauty columnist: informative without ever being a boring read, very smart, totally trustworthy and delightfully unhysterical. A book that takes beauty seriously enough to devote five pages to foundations, but also quotes Jerry Seinfeld without batting an eyelash („I don’t understand how a woman can take boiling hot wax, pour it on upper thighs, rip the hair out by the roots, and still be afraid of a spider“). Fabulous.

One of Sali’s many recommendations that have changed my life: investing in brushes from Laura Mercier, like the Corner Eye Colour Brush.

On the one hand, the Mermaid Shampoo und Conditioner set costs as much as an EasyJet ticket. One the other hand: my hair is so soft now that I almost don’t need to use a brush and smells like a coconut confection.

Beauty obsession of the year: serums. After using the Hydrating Serum from Luxsit to the last drop, I’ve switched to Face Oil from Dr. Jackson, which has given my fairly dry skin a rosy glow.

How much does it cost to look like a Kardashian? From November 5th onwards, when the Balmain for H&M collection hits stores, it’ll practically be a bargain. Designer Olivier Rousteing let the New Yorker into his world and gave a bafflingly candid interview about his BalmainArmy, best buddy Kris Jenner and his critics.

Another great feature from the New Yorker: „The Couture Club“, about the world’s richest fashion clients who met at the Dolce & Gabbana Alta Moda show in Portofino this summer. Jaw-dropping.

Been enjoying the six part series „The Future of Fashion“ by Alexa Chung for British Vogue.

T Magazine has the 50 best photos from fashion month.

My friend Elisabeth has been writing a column for ZeitMagazin called „Die trinkende Frau“ for a few years now. I think: not nearly often enough. Although it’s probably better for her health that the column isn’t published more regularly. I adore all of them, especially the most current one: „Über die Gier nach Bier“. (in German)

The main character in the new Pixar movie is called Arlo. We had nothing to do it with it.

Me: „Put your shoes on.“
Child: „Let the games …“
Me: „Nonononono …“
Child: „BEGIN!“
Me: „Just put your shoes on.“
Child: „In the vacuum of space, are there free-floating molecules?…“
Every conversation between a parent and a child in four conversations. I laughed tears. Then I cried tears when I realised that this will be the next 18 or so years of our lives. (Thank you, Mosch)

This entry was posted in a week in fashion, beauty, fashion and tagged . Bookmark the permalink. Post a comment or leave a trackback Trackback URL.