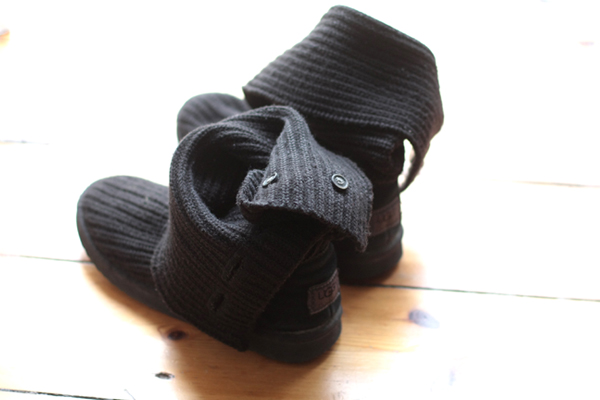 Apparently, there’s nothing I wouldn’t disclose in the Slomo style column. Even owning Ugg boots.

These are my Ugg boots.

Honestly, I never wanted it to come to this. But I had no choice. The winter three years ago was too hard, my feet were too cold and didn’t Uggs look at least okay? And if not okay, didn’t they look warm? I tried them on in the store. They were very warm. So warm in fact, that my feet glowed like little ovens. And they were incredibly comfortable. Maybe nobody would notice when I wore them…

When I wore them to the office the next day, my colleague from the fashion desk rolled her chair over to me, took one look at my feet and said: “Traitor.”

She was right, of course. Ugg boots are to footwear what anoraks are to outerwear. Bulky. Inelegant. The ruin of every outfit. They make me look like a baby elephant. They even make me walk like a baby elephant. When I take the Uggs out of their box every winter, I feel like my other shoes are looking at me disapprovingly, saying: Really? THOSE boots? Are you trying to offend us? Because it’s working!

I would like nothing better than to find a pair of boots that are warm and comfortable, and look sensational. I have tried finding those boots for the past three years. Without success. A friend of mine has made the compromise of wearing her Uggs only indoors. Great idea – if I could somehow arrange not to leave the house between November and April.

This year, I’m trying a new tactic: I’m flying to Australia for almost four weeks, where the things are from – and where, interestingly, hardly anyone wears them.

As it would be a bit pricey to flee the winter to Australia every year, I want to know: which boots help you get through the winter?

If you say “mukluks”, I’ll scream.

This entry was posted in fashion, hers and tagged style column. Bookmark the permalink. Post a comment or leave a trackback Trackback URL.