leanne shapton on „women in clothes“ 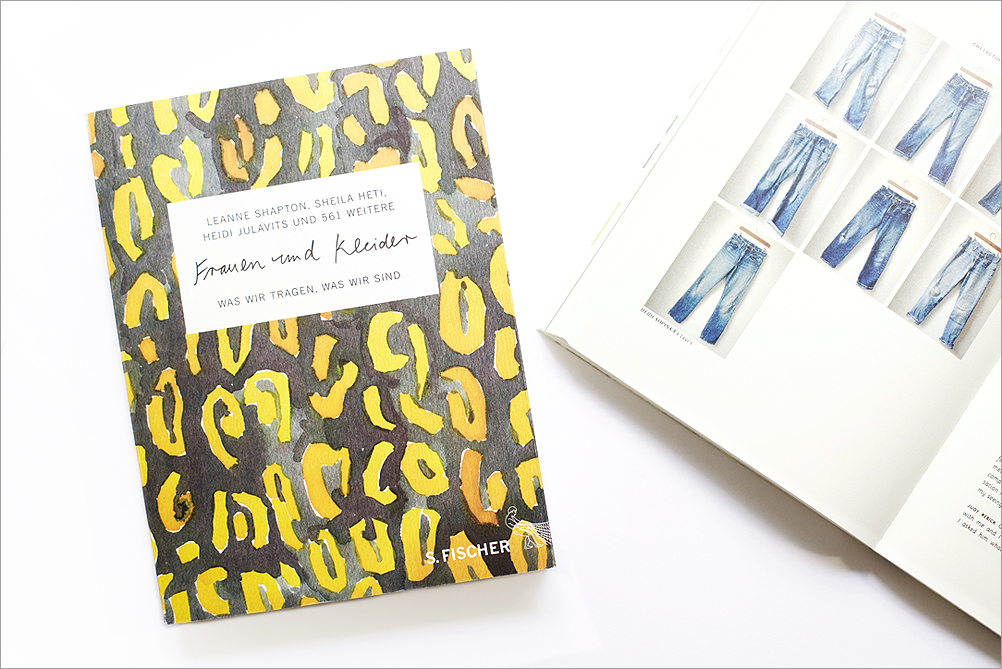 The title already tells you that this is probably not going to be an ordinary book about fashion. Women in Clothes. It’s so straightforward. So modest and yet mightily bold, because it would be quite a task to cover the entire spectrum of women and their clothes.

What makes it in fact an extraordinary book about fashion is that it delivers on that promise and tells you even more than that broad title suggests. Heidi Julavits and Sheila Heti, both novelists, together with illustrator Leanne Shapton, who’s also a writer, wanted to very simply find out why women wear what they wear. So they sent questions to over 600 women, among them famous names like Lena Dunham, Miranda July and Kim Gordon, who appear next to seamstresses, teachers and trans women. The answers, which take the form of brief sidebars as well as extensive interviews, essays, pictorials and illustrations, are as diverse as the protagonists themselves and unveil how much more our clothes say about us than where we went shopping last week.

Perhaps these three women had to come along to remind us that you can be passionate about fashion without writing about either pompously or trivially. In any case you’re damn thankful for this stupendously clever, moving, wise and funny book which never fails to take you seriously.

It’s the fourth book I’ve read by Leanne Shapton, after Was She Pretty?, Important Artifacts… and Swimming Studies, and for all I care she could write an instruction manual for lawnmowers next, I’d buy it. She’s bafflingly brilliant at seeing magic in the mundane and uncovering beauty in our insecurities. When you’d love to meet someone as much as I did her, I almost didn’t have the guts to ask for this interview. But I had to, of course. And she’s as wonderful as I had hoped. 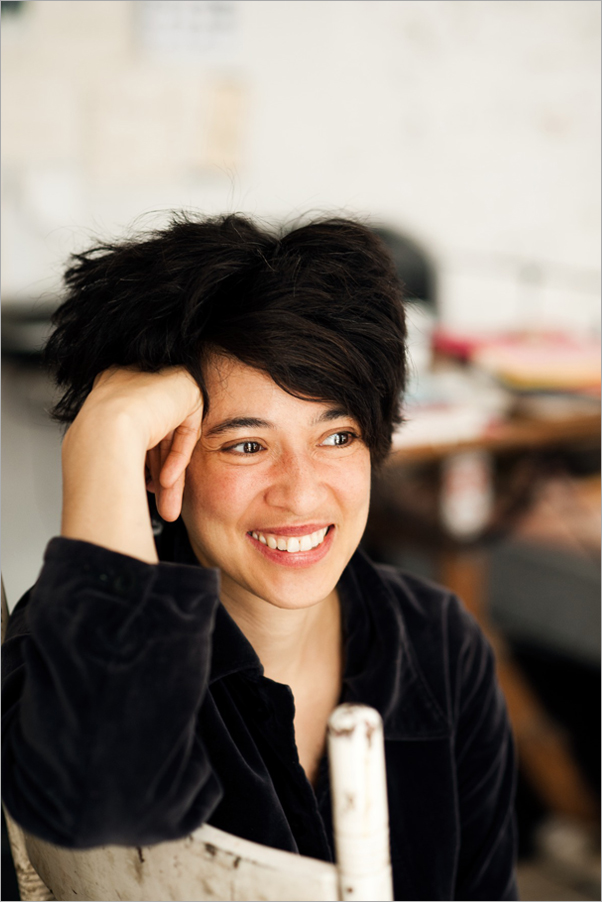 Women in Clothes is unlike any fashion book I’ve read before, because it feels like I’m taking part in a conversation about clothes, instead of being instructed in what to wear.
Well, the difference to other fashion books is that we’re not trying to sell anything. Except books!

You have a background in art and literature, both Heidi and Sheila are novelists. What made the three of you decide: let’s do a book about clothes!
The starting point was that Sheila went looking for this book. And she couldn’t find it. She’s a writer, so fashion is not essential in her everyday life, but her boyfriend cared a lot about clothes and she was wondering whether she should have a bigger opinion. She was curious about what other women, who are not in the fashion industry, felt about what they wore and thought about how they dressed. So she started sending her friends these questions. I was one of them, Heidi was another, and Heidi said: this should be a book! We felt that there was a real gap in the style section for something that addressed how women – real women, thoughtful women, intellectual women, poor, rich, white, black – talked about clothes.

I was initially almost irritated that it’s a fashion book with very few pictures. What made you decide to omit portraits of the women you talked to?
I knew that my role would be as the designer of the book and I made that decision early on, but we all agreed that we didn’t want to show the interviewees. It’s like Sheila says: when there’s a picture of a woman with a text beneath it written in the first person, it distances you from her, because you’re looking at her and hearing her voice talking at you. But if the image is gone and you read what she’s saying, you put yourself in her shoes and that’s much more empathetic.

I have to admit that I often thought „I wonder what she looks like?“ as I was reading and would google image search them.
Which is exactly what we would do when we got the responses. Look, we’re all guilty of this impulse to want proof and then to judge. Photography has exploded in the last years, especially through blogs and Instagram. The connections that we make through pictures are so sophisticated and, actually, I think it’s making us numb rather than making us sensitive. So we thought: let’s try a different exercise to unlearn making these snap assumptions.

How did working on the book change your own perspective?
After hearing all of those stories, and hearing all of those women contradict each other, I think I’m less judgmental. When I see a woman walking down the street, I’ll think more about why she chose what she’s wearing rather than me going: I would never have done that. I mean, it’s fun to judge sometimes. But I think that after a woman has read this book, she will feel less like she’s in a constant competition.

A lot of the women you interviewed say that they get inspired by looking at their friends, mothers, even strangers. What do you draw input from?
Paintings. Especially from Edvard Munch, Pierre Bonnard and Edward Vuillard, who would often paint women’s dresses. I really love the silhouettes and patterns of that time period. Sometimes it’s just the color combinations in abstract art. There’s a beautiful Willem de Kooning at the New Whitney Museum in New York and I would just love to wear those colors. But I’m also inspired by what other women wear. One of the nice things that came out of working on this book was seeing how many women don’t think of fashion as a contest.

But while we’re comparing, we’re also competing with this imaginary, unattainable image of what a perfect woman looks like. Is it because fashion is often equated with self-improvement?
Certainly the tone of women’s magazines is: here’s how you can fix that flaw. Which is so condescending. It’s gross actually. I wouldn’t talk to my daughter that way. Why are you talking to me that way?

It works though. There was a piece in British Vogue recently, and this is a magazine I normally love, that gave advice on how to camouflage specific problem areas of your body. I remember thinking: Should I be more concerned about what the backs of my knees look like in a dress?
We’re a generation of women who feel that their arms are problematic. Nobody’s arms are problematic! I can immerse myself in fashion magazines, but often you read them and go: I have dry patches on my elbows, how awful. When you have children, you realize that you don’t really want to be the kind of mother who says: Honey, you might want to exfoliate. Although you can probably do no right and no wrong. One day, my daughter will be mad at me because I didn’t tell her about dry elbow patches.

How old is your daughter?
She’s two. Even when they’re children, we talk differently to females than to males. I’m guilty of it, too. I’ll see a girl and say „she’s beautiful“. Whereas with a boy, I might also say that he’s beautiful, but there’s always another qualifier, like clever or brave. It’s ridiculous. And what if one day she’s not so beautiful? (laughter) Anyway, I feel you don’t look like yourself until you’re forty.

Has getting older affected your attitude towards fashion?
You know what’s helped put fashion into perspective? Working on this book. I’m so tired of talking about clothes. (laughter) But, yes, age has a lot to do with feeling more comfortable about myself. On all levels of life. You’re just less angsty about stuff.

For most of the women in the book, style is an emotional subject. What stories affected you the most?
Some of the most moving pieces to me are the ones where women talk about working in sweatshops, like the interview with Reba Sikder, who was in the Rana Plaza collapse. Hearing them talk about their experiences and what they wear really got me thinking about these women who touch our clothes. I’m not as blinkered anymore. I’m not saying I shop any better, but I do love buying vintage clothes, both aesthetically and because I’m trying to make my recycling bit. We just have a horrific surplus of everything.

You photographed a series of the things that women buy in multiple for the book.
There’s a note in that about consumption. Mostly, it was a way to include portraits of women without showing them. The reader could look at someone’s clog collection and conclude something about them. I like that they are quite oblique portraits, very specific, but also with a touch of darkness. Why so many of the same thing? Why are we always searching for the ideal version of something?

Your own collection of white trousers is in there, too, 16 pairs in total. What draws you to them?
I like uniforms, especially equestrian wear. So perhaps it’s from that. I think every woman has a default unfiform that she falls back on. For me it’s white trousers, some kind of silk blouse and trainers. When I wear that I forget what I’m wearing.

Yet today you’re wearing a sweatshirt, a skirt and overknee boots. How did you decide what to put on this morning?
It was what was clean. Although this sweater has my daughter’s yogurt finger marks somewhere on it. I’m getting on a train later, so everything had to be comfortable. Just a practical decision. I think Heidi put it best when she called it ‘dressing for the immediate future’. You’re writing a little short story to face every eventuality that you have to deal with. If you’re seeing a friend you haven’t seen for a long time, you will write a different story than if you’re picking up your child from daycare.

Can you remember the last time you bought something that you didn’t immediately know what its message was?
There’s this vintage clothing store that I like in Toronto and the owner went down to the basement and came back with this weird jumpsuit and said: this would look good on you. My friend who I was with that day said something complimentary, so I thought: I would have never picked this out, but I’m gonna go with it. This totally strange, hand-made, seersucker jumpsuit. I mean, I look like a baby in it! I guess I like being talked into stuff sometimes.

When do you feel most comfortable with yourself?
One of my favorite things in the book are the answers to the question „I feel most attractive when…“ One woman said: in my nightgown, outside, holding a gun. I love that she plucked that out. I don’t know if my answer will be that interesting, but for me it’s in a swimsuit, neck-deep in water.